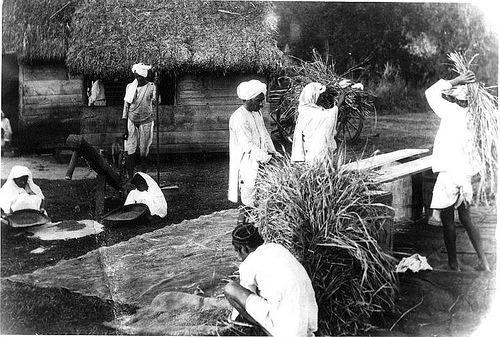 The spirit of jihad in Jamaica and the West Indies entered a new phase of peaceful consolidation following the jihad of 1831-32; that of replacing slavery by indentureship (1838).

About 16 percent of the 37,000 indentured Indian immigrants who arrived between 1845 and 1917 were Muslims. Despite their small number and the adverse environment, they established Islamic institutions. The inner struggle for self-purification replaced the defensive jihad of the Maroons and the Muslim African slaves. This revitalized Islam in Jamaica. India had been ruled by Muslims from the early 13th century. The Moghuls (1526-1858) enriched India by building a great empire that still is a source of pride in modern India.

Slavery had lost its importance by the 1830s. India and China were prominent in Britain’s commerce ad trade, making enormous contributions to its industrialization and economy.

After losing the North American colonies, Britain sought to make India a classical-style colony. The British exchequer knew of the East’s immense wealth, as the East India Company’s trade in silk, muslin, cotton and piece goods had generated great wealth for Britain since the late seventeenth century.

India was the home of cloth manufacturing and the greatest and almost sole supplier of cotton goods, precious stones, drugs, and other valuable products. Evidence suggests that “all the gold and silver of the universe found a thousand and one channels for entering into India, but there was not a single outlet for the precious metals to go out of the country.”

The empire’s opulence and religious harmony gave way to violence and plunder as Britain, following its victory at the Battle of Plassey (1857), pursued a divide-and-rule policy. Evidence suggests that probably between Waterloo (1815) and Plassey a sum of £1 billion was transferred from India to British banks. Between 1833-47, another £315 million flowed into the British economy.

But Britain was not content. To meet its labour needs in the British West Indies, Britain exported about 500,000 East Indians to the Caribbean (1838-1917).

Out of 80,000 Muslims, about 6,000 came to Jamaica during the indentureship period. Their small numbers and challenges of plantation life (starvation, un-Islamic diet, deplorable living conditions in barracks shared by 25-50 adults of different origin, ages, sex, religion, kinship, and 9-hour work days) strengthened their spiritual struggle.

Many came from such predominantly Muslim cities as Lucknow, Allahabad, Ghazipur, Gorakpur, and Shahabad, all of which had witnessed the zenith of Islamic culture and social life. These Muslims ensured the preservation of Islamic identity through community solidarity, adherence to Islamic culture and values, and Islamic education.

This unity manifested itself in the establishment of 2 masjids, which institutionalized Islam in Jamaica.

Muhammad Khan, who came to Jamaica in 1915 at the age of 15, built Masjid Ar-Rahman in Spanish Town in 1957, while Westmoreland’s Masjid Hussein was built by Muhammad Golaub, who immigrated with his father at the age of 7.

This masjid was named in honor of its first imam, Tofazzal Hussein. The two masjids became the community’s spiritual centers, and united the Muslims by teaching them about Islam and its practices. They functioned like the Holy Mosque in Makkah in worship, and like the Prophet’s Mosque in Madinah in terms of the community’s spiritual, educational, social, and political life. The indentured Muslims laid the foundation of the 8 other masjids established in Jamaica since the 1960s, with the advent of an African Muslim community that now forms the largest Muslim ethnic group.

With the Indian indentured Muslims, and then with others from the Subcontinent, came the rich Moghul culture’s culinary arts, fashion, lifestyle, and aesthetic arts. Gastronomy and exotic delicacies and entertainment dishes have been appreciated at state functions, special ceremonies, and restaurants bearing such Moghul names as The Taj Mahal and Akbar.

Since the 1960s, the variety of Moghlai dishes has increased by new immigrants from the Subcontinent. These Moghul-inspired delicacies are cherished in Jamaica, and more particularly in Trinidad and Guyana.

Be the first to comment on "Jamaica – The Muslim Legacy" 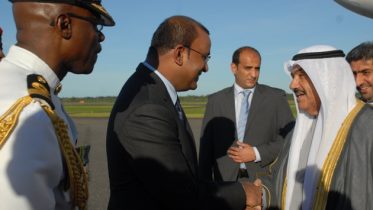 After visiting Antigua and Barbuda, Mexico and Cuba on a 3-week tour of Latin America and the Caribbean,  Kuwaiti Prime Minister, Sheikh Nasser al Mohammed…