Guyana should join the Islamic Educational, Scientific and Cultural Organization (ISESCO), an arm of the Organisation of Islamic Conference (OIC).  Both Guyana and Suriname are members of the OIC.

This body, regardless of the word ‘Islamic’ attached to its name, works to advance education in the fields of science, technology and culture among member states.  On the contrary, the OIC is not just “a kind of Commonwealth of the Islamic world.” (Stabroek News, Aug 16, 2009).  Muslim minority countries like Russia, Côte d’Ivoire, Thailand, Cameroon, Gabon, Sierra Leone, Benin, Mozambique, Suriname, Uganda and Togo are members of the OIC. These are secular states.

Why would the US appoint an envoy to the OIC and why is Russia an observer member of the OIC?  Currently, the Philippines is aggressively seeking full membership. Those who attack the OIC membership should do some more homework on the subject.  The secular character of Guyana is not threatened by this membership. Ironically, Guyana is a member of the Commonwealth, whose chief is the head of the Church of England.

Membership should be seen as a partnership between Guyana and the Islamic world as tensions between different civilizations increase and is an opportunity to expand political, cultural and economic cooperation. ISESCO renewed its pledge this month to support “scientific research and researchers in all knowledge areas, encouraging talented scientists in the different specialties, and providing the means necessary for promoting science to the deserved highest levels.”

Membership will bring financial benefit to institutions in Guyana such as the University of Guyana which ISESCO pledged to help during a meeting I had with officials at its headquarters in Rabat, Morocco.  Guyanese NGOs will also benefit from this membership.  Guyana will also be able to tap funds for Carifesta participation. ISESCO officials discussed a wide range of projects that they can initiate and execute with the Government of Guyana and the private sector.

During that interview with ISESCO in Morocco, it was revealed that due to Guyana’s economic situation, Georgetown will not have to pay membership dues. Yet, Guyana will qualify for all the benefits and voting privileges that come with membership. Guyana will have to take the initiative to join.  ISESCO office holders are eager to help Guyana in facilitating speeding funding of projects in the near future.

When Foreign Minister Carolyn Rodrigues-Birkett attends the upcoming OIC Foreign Ministers meeting in Tajikistan, May 18-20, Guyana will have another opportunity to join ISESCO.  The necessary membership papers were prepared in 2008 and sent to the OIC heads of government summit in Dakar, Senegal.   The Ministry of Foreign Affairs should not lose focus on this issue.

Be the first to comment on "Guyana should join ISESCO" 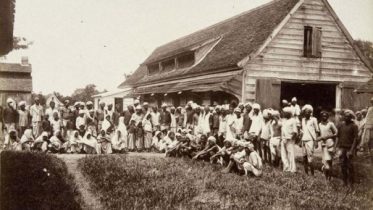 Abstract This is the first paper to deliberate on the overseas Hindustani Muslims of British Guiana and more significantly, the role they played in the…