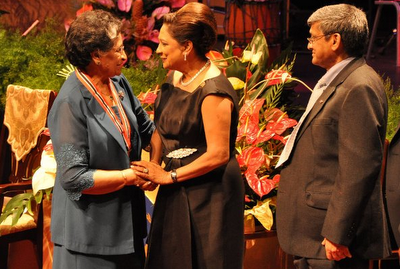 Zalayhar Hassanali, left, is congratulated by Prime Minister Kamla Persad-Bissessar after receiving the nation’s honour, The Order of the Republic of Trinidad and Tobago, at the national awards ceremony at Queen’s Hall, St Ann’s. Looking on is Mr Bissessar, the PM's husband.

Zalayhar Hassanali  wife of late president Noor Hassanali, was among four recipients of the Order of Trinidad and Tobago, the country’s highest award, at Queen’s Hall on Wednesday evening, during the nation’s Independence Day Award ceremony.  Her award was for distinguished and outstanding service to T&T in the sphere of community service.

Mrs. Hassanali said she was humbled by the recognition. “I am very grateful to the Government and the people of Trinidad and Tobago,” she said in an interview later. She advised citizens to keep their heads high at all times in the expectation that all would be well for the nation as it celebrated 49 years of independence. She added that she was “a bit emotional” about the award because her deceased husband had encouraged her to do social work in the early stages. “I get emotional because I think of him as well,” she added.

In previous years Mrs. Hassanali had to greet recipients during the awards ceremony as the wife of the then President. On Wednesday during the ceremony, she was warmly greeted by President George Maxwell Richards, his wife Dr Jean Ramjohn-Richards, Prime Minister Kamla Persad-Bissessar and her husband and the Chief Justice Ivor Archie and Mrs Archie. Hassanali said she continued to think of others and offered as much help to them as she could.

Being a Muslim, Mrs. Hassanali said receipt of the country’s highest award on Eid, the feast marking the end of the holy month of Ramadan, was a “double celebration”.

Zalayhar Hassanali is known well beyond serving as first lady of the nation from 1987 to 1997. She is known for her contributions to culture, child welfare, the environment and education. During her position as first lady, Hassanali was involved with 44 Non-Governmental Organisations, charity groups and social foundations. Hassanali was born in humble surroundings on May 3 1931 in Siparia. Her father, Ali Mohammed, was a tailor and her mother Khartoon was a seamstress. She attended Siparia Union Presbyterian Primary School, Naparima Girls’ High School from 1944 to 1947 and Naparima College from 1948 to 1949. At 21 she married upcoming lawyer, Noor Hassanali, who practised in San Fernando. She had two children, Khalid and Amena. Before becoming first lady, Hassanali worked in education and served as a founding member of the Muslim Teachers’ Association. During her time as first lady she attended six First Ladies of The Americas and the Caribbean Conferences. Today she continues to serve the country through her involvement in many non-governmental and charitable organisations.

Be the first to comment on "Former First Lady of T & T receive highest national award." 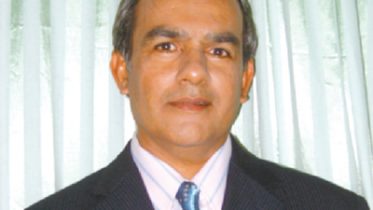 Dr Nasser Mustapha is a senior lecturer in Sociology and deputy dean, Graduate Studies, The University of the West Indies, St Augustine. He has served…