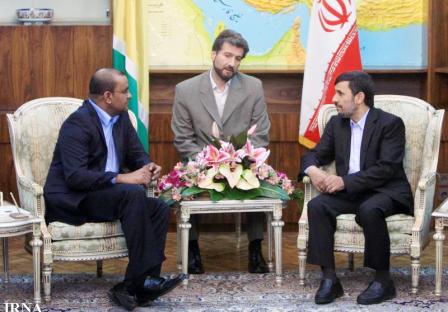 Tehran, Jan 20, IRNA – President Mahmoud Ahmadinejad on Wednesday officially welcomed his Guyana counterpart President Bharrat Jagdeo at the presidential palace in Tehran.  At the welcoming ceremony, the national anthems of both countries were played and the two Presidents reviewed a guard of honor.

Guyana’s President heading a high ranking politico-economic delegation arrived in Tehran on Wednesday for talks on expansion of bilateral relations with Tehran. Guyana’s ministers of Foreign Affairs and Housing Development are accompanying their President during the visit.

President Ahmadinejad said in his welcoming address “The world is now on the verge of big change and it is the responsibility of world people to get ready to establish new world order based on friendship and brotherhood”. Given the current level of economic, cultural and political cooperation between Iran and Guyana, the Iranian President expressed the hope to witness expansion of relations and cooperation in various fields with reliance upon existing potentials of both sides.

The Guyanese President, for his part, called for expansion and consolidation of ties between the two countries and said the two countries have widescale potentials to bolster economic and commercial cooperation. “It is vital for the world nations to thwart propaganda campaign of western powers through organized media activities and under umbrella of human rights,” President Jagdeo said.

This is Jagdeo’s final leg of a three-nation tour of the Middle East. Prior to Iran, he visited Kuwait and the United Arab Emirates (UAE). He is the first Guyanese Head of State, and the first leader of a Caribbean country (Caricom) to visit the Islamic Republic of Iran.  Guyana’s application for permanent membership in the Organization of Islamic Conference (OIC) was accepted in 1998 and Guyana became the 56th member state of the OIC that year with strong Iranian support.  In 2001 former President of Guyana, Dr. Cheddi Jagan met with the Iranian Foreign Minister, Ali Akbar Velayati at the Non-Aligned Movement’s (NAM) Summit in Cartagena and extended to him an invitation to visit Guyana.  This was followed by several visits to Guyana by Iranian envoys.  Iran then appointed a non-resident ambassador to Guyana.  More recently, in 2009, President Jagdeo met with Iranian the Foreign Minister, Manouchehr Mottaki.  Guyana, a former British colony and South America’s only English speaking country with a vibrant Muslim community of about 12 percent and a member  of the OIC, has forged strong ties with the Middle East since its independence from Britain in 1966.

Raymond Chickrie contributed to this report.

Be the first to comment on "Ahmadinejad welcomes his Guyana counterpart" 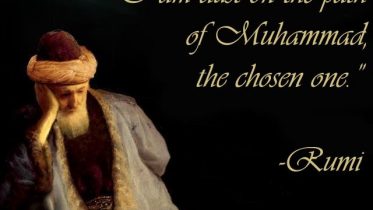 All praise is for Allah, the Glorified and the Exalted, and may He shower His choicest peace and blessings in perpetuity on His most beloved…

Genocide Of The Rohingya While The World Stands On The Side